We at Calamitypolitics.com respectfully ask that you appear before the Judiciary Committee of Congress to specifically address the factors described in your report. Mr. Mueller, our reading of your report clearly indicates Donald J.Trump, President of the United States, has participated in obstruction of justice. Your  testimony must occur in front of  television cameras. The public must know the truth, whatever it may be. Watching your face, your demeanor is essential. We believe such openness is required for the public to grasp the essentials of your report.

Mr. Mueller, impeachment by its very nature is “political”. The Founding Fathers made the president’s removal a political process.  The public is a central part of that process. The public needs to hear you say what you found. At last count nearly a thousand former prosecutors have stated the president’s crimes are indictable. In addition, Trump is an unnamed conspirator in the Michael Cohen case in the state of New York.

In this same vein, we would appreciate it if you would appear to testify whether  subpoenaed or voluntarily.  Our country is at a dangerous point in history. No matter how much pressure you receive from the White House please appear. To be honest, if you describe “no collusion” or “no obstruction of justice” committed by the President that would be great.  The public will be able to sort out the truth if you give it to them.  The public needs a spin-free Mueller interpretation of your investigation.

In two separate letters to Attorney General Barr you complained that the AG had misinformed the public about the findings. It is imperative that you appear in person and sit for a filmed under oath testimony Mr. Mueller. We truly believe any testimony you give that is then presented to the public by transcript will be a failure. You complained that Bill Barr has manipulated your original report. Your testimony will clear up any confusion.

Me and The Mueller Report 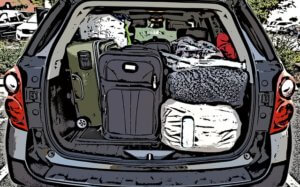 My bags were packed and loaded in the car for an off-grid get away at the Oregon coast.

The beach house was reserved. My bags were packed and loaded into the car. The plan was to pick up my favorite partner in crime at 10:oo a.m. for a few days away from Castle Gerimortis. The ad promised off grid quiet. No cell phones, no television, no internet. I went to bed eagerly anticipating the time away. I woke up about 3:30 a.m. from a dead sleep making ocean diver sounds that reminded me of the song, Aqualung.  After coughing up half of my right lung, or maybe it was my left lung, I laid back on the bed and focused on my funeral plans.

Too Hot To Handle

Remembering that I haven’t had a fever in at least 20 years made me question if I even owned a thermometer. After stumbling about the bathroom in fevered confusion, pulling drawers in and out. I finally found the damn thing in the bottom of the drawer with the dog clippers, and a souvenir from a 420 celebration three years ago. It was one of those glass and mercury affairs that they haven’t made since Woodstock.

After cleaning with soap and water I stuck the old glass stick in my mouth and waited. I knew I’d need to wait at least three minutes for a result. Such co-ordination of knowledge and action failed me. With fiery anticipation after a mere minute, I pulled the thermometer from my mouth. OMG it had already registered 100.9. Oh, no. Now I had to shake it down and start all over, because I knew my true temperature must be much higher.

Waiting For The Rapture

I went back to my bedroom, located my cell phone and set the timer. I laid down on the bed. Remembering the school nurse always said, “keep your lips closed tight.” Following that advice from childhood I laid there waiting.  When the phone beeped, I jerked it from my mouth and turned it over on its side, adjusting it to the light I saw a reading of 101.6. I put the thermometer on the bedside table and closed my eyes, waiting for the rapture.

I must have passed out from lack of oxygen to the brain. At 8 o’clock I was summoned back from zombie-dom by a fit of coughing severe enough to loosen my back teeth.  Apparently, death was not as close as I had hoped. My fever seemed to have broken and I found myself staring out the window as dry-mouthed as a desert wanderer and as tremulous as a puppy who had just missed the newspaper. I wondered if I could stand up. Maybe I should at least wait until the latest round of the chest splitting coughing passed. Once the most recent coughing spasm subsided, I was ready to stand.

Mustering the strength of a college freshman headed to Virginia Beach for Spring Break I forced my feet to the floor and was reassured that the spinning room had not effected the solidness of the planks under my feet.  I may not be a college freshman, but the thought of sun and surf urged me forward.  I slipped on a black T and canvas colored shorts. The outside temperature at the mountaintop was hovering at 40 degrees, but I have a great heater in the car. I debated my ability to drive. I guess we would soon find out. The next thing I see is Dave grinning at me, saying, “Hey, Sweetie.”

With Dave behind the wheel we left Portland weirdness for the promise of sunshine on Oregon’s Emerald Coast. The “southern” coast in my vernacular. Our destination, Yachats. Pronounced, Ya-hots. It is usually warmer and less windy than the much closer northern Oregon beach towns of Seaside and Cannon Beach. I bury my head in a pillow and cough my way from the 217 on-ramp to the I-5 Interchange.  I had loaded my makeup bag with a shitload of over-the-counter medications scavenged from my medicine cabinet. Airborne cough drops, Tylenol, sips of cherry Robitussin, Vitamin C gummies, Airbore immune support gummies, and a Super B-complex supplement whose tablets smell like a 5 day old decomposing corpse. 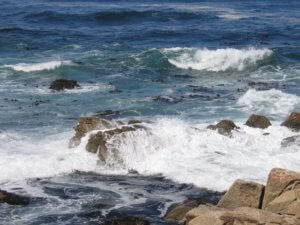 Sea Breeze cottage had a great view of the ocean

Nearly four hours later I open my eyes as Dave turned into the driveway of Sea Breeze cottage. The cabin, although sitting on the east side of 101, has a lovely surf view, and the charm of a cottage built over a summer vacation by dad and junior in 1950. Dave the man, unloaded the car, while I wandered uselessly supervising the placement of every suitcase, and pillow.  I grabbed another handful of Vitamin C gummies and fussed and complained as he nodded and grimaced.

In It Goes, Out It Goes

I had read in a medical textbook several years ago that it is impossible to overdose on Vitamin C because your body cannot store the vitamin, any excess Vitamin C is automatically excreted through the kidneys. So, no worries.  Eat away I decide. There does seem to be significant anecdotal evidence supporting high doses of Vitamin C to shorten cold symptoms. At this point I’d try anything, including experimental drugs.

That first night at the cabin I fell asleep with little effort. Self-medication in this case appeared to be just the ticket.  My fever broke and I woke up shivering on a damp sheet. Dave was banging doors and proclaiming dog walking time as I shifted from my world to his. Was I imagining it, or could I actually breathe through my nose? I gave it a second attempt.  Hell, yeah. Now if I could just rid myself of that paper crackling sound my chest made every time I took a breath.

A Tug A War

When Dave got back to the house, he launched into a story of animal vs man. He said he would be driving into town now if the dog hadn’t put up an extraordinary fuss when it looked like the morning walk would be delayed. He described a leash tugging affair between a 180 lb man in caffeine withdrawal and a 10 lb demon with a biological urge. The 10 lb demon had won the battle. The image brought a smile to my face.

“Hey,” he said, “you look better. But, you sound like hell. I was going to let you sleep and drive into town and get a coffee, but now you’re up. Feel like a drive? There’s no coffee in the cabinet and we didn’t bring any.”

Hearing the call to action we headed up Highway 101 to Yachats “city” proper.  A rustic timbered bistro sat on the ocean side of the highway beckoning us in. When we stepped inside, I was disappointed. The building sat right on a cliff overlooking the exquisite beauty of the Pacific Ocean and the builder had put the kitchen where the picture windows should have been. I would say such an act is close to criminality. We skipped the croissants and breakfast bars and paid for two coffees to go.

As I watched Dave putting his sixth coffee creamer into his coffee cup I was distracted by a television playing in an adjacent room. I walked to the threshold where I could get a better view of the TV screen. A Breaking News story was playing. The sound was turned off. From what I could see ABC news chief anchor, George Stephanopoulos, was sitting at the news desk with a group of men and women. The gathered group was shuffling and reshuffling reams of white papers covered with multiple yellow stickies. I could see other pages were blacked out and lay discarded on the desk.  “The Mueller Report” banner ran in red under the action. I stood gawking at a silent screen.

I stepped back, turned, and grabbed Dave by the arm to get his attention, nearly upsetting his coffee cup. “Fuck, Dave. No cell phone. No streaming TV.  We are fucking Robinson Crusoe and Friday”. My voice, harsh from two days of coughing, was rough-edged and irritable. The couple at the table next to the window looked in my direction, but looked away quickly when I sent a laser-eyed response to their unwanted attention.  Sometimes people just know, when it is best not to engage, or comment, and I approved of their renewed interest in their food.

Dave, obviously taken back, said nothing. Apparently, he too was reluctant to engage, or comment on public madness. Climbing back into the rig, I continued, “No I’m fucking serious, what the hell are we doing at the beach? Not even a regular beach. We are at No Amenities Beach.  Why these three days, of all days, do we decide it would be cool to go off grid? We never go off grid! OMG, off grid. Off grid!  If I wasn’t the editor, I’d fire my fucking ass.”

I continued ruminating as we headed south, “How the fuck could this happen? The hottest news story of the last century and we are in the fucking middle of Nowhere Beach.”

Dave turned toward me and said carefully, “Look, the sun is shining, the coffee is good, we are in one of the most beautiful places on earth, and there are at least 300 VHS movies back at the cabin. Time to forget Calamity Politics, Trump’s tragic opus, the Republicans and the Russians. We can save the Republic tomorrow, Wonder Woman.”

I clicked my two gold bracelets together and winked at my bearded chauffeur, “Thanks, Steve Trevor. There is always tomorrow.”