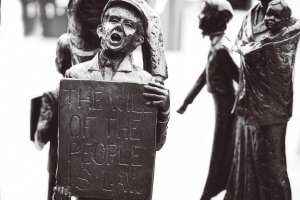 12/19/2021. Joe Manchin (D.W.V.) is on FoxNews (sic) telling Bret Baier he “cannot vote” for the Build Back Better bill. Finally after months of dancing about, throwing up one road block after another Manchin, playing with the press and his colleagues has finally come clean and said it out loud. He, the lone Democrat,  was now going to squash the bill, that would have given assistance to 70% of his constituents.

I am dumbfounded. How could this rich, fat, white, yacht sunning, coal mine owning, entitled man be so cruel, and corrupt? How can he shut his eyes to the basic needs of the most vulnerable people in his state? West Virginia is one of the poorest states in this country, it seems Joe wants to keep it that way. By standing against the BBB act Manchin is not only denying West Virginians food on the table, affordable prescriptions for life saving medicines, and dentures in their mouths, but every other person in the country. Without remorse, apparently.  Enraged, I switched to CNN where Jake Tapper was interviewing Bernie Sanders (I.Vt).

Bernie Sanders went after the failed senator from West Virginia with unrestrained passion. Bernie called Manchin a “coward” for not standing up to the lobbyists and special interest groups (which Manchin is part of). Bernie, is also a wealthy man, just like Joe Manchin. But, Bernie seems to have a deep well of human empathy, decency, and compassion, which apparently, Manchin cannot understand or emulate. Is Manchin capable of embarrassment?  Being the only Democratic senator that is willing to let kids go hungry, not only in West Virginia, but across the nation, should make him red faced with shame and embarrassment.

It is time to purge the Democratic party of obstructionists, like Manchin, that are willing to stop a president and his policies by their single vote. Joe Manchin you were not elected president of the United States. Get in line and support President Biden and the Democratic platform. Support voting rights. If you are a Republican, Mr. Manchin, run as one, don’t pretend to be a Democrat. Be brave. Be courageous. As I see it Mr. Manchin, is intent on his legacy being nothing more than the dark smear left by a wet fart.

It is time to fight the obstructionists in the Democratic party. Joe Manchin cannot be allowed to stand in the way of progress much longer. He has ‘shown his ass.’ as they say in Texas, and a few other places; time for Mr. Manchin to vote with his party or leave the party.