Sam the Sham And The Pharoahs

My husband and I were married in 1965. My husband and I waited nervously every day expecting to find a draft notice in the mailbox at any time. He was in his junior year in college and did not want to disrupt his education. In those days there was a military draft and young men all over the country were being drafted. My husband and I were mentally preparing ourselves for that day we knew would come, and he would be sent to Vietnam. The United States had “advisors” in the country for at least a decade by that time. The Vietnam War was escalating in SE Asia, and the Cold War was growing hotter by the day.

The rhetoric of the politicians described Vietnam as a domino piece and if it fell so would the rest of Asia. LBJ was president and he had been increasing the American presence in SE Asia dramatically. By the end of 1966 we had a young son, and my husband had finished his bachelor’s degree. After many long and tortured conversations he volunteered for the Air Force and deployed to the huge air base at Da Nang, South Vietnam. The year that he went to Vietnam “Wooly Bully” was screaming from every radio in America, and the American soldier took it to South Vietnam.

There were major protests across the United States by 1968. LBJ sensing the country had turned against his conduct of the war announced he would not seek re-election. Richard Nixon said he had a plan to end the war. As Americans would see that was all a lie. And the anti-war protests grew. Seeing the people fill the streets outside the White House brought back those days vividly. Americans protest when American politics do not meet the needs and desires of the American people. When Trevor K. McNeil suggested “Wooly Bully” as the Calamity Politic’s Jukebox choice of the day, I said, “hell, yeah”. Here it comes, ready or not, Sam the Sham and the Pharoahs, in the long version of “Wooly Bully”.

“Wooly Bully” by novelty rock ‘n’ roll band Sam the Sham and the Pharaohs came out in 1965. “Wooly Bully” was written by the band’s frontman, Domingo “Sam” Samudio.” It’s all about the beat.

The idea of Veteran’s day is to remember. This only stands to reason. Though it can also, ironically, be a way to forget. To paraphrase Alan Bennett in his play, History Boys, there is no better way to forget something than commemorating it. It is not that people forget the event happened, but it can lead to a disconnect with younger generations, not sure what it has to do with them. Particularly, if enough time has passed for society to change significantly. A prime example of this is the repealing of the general military draft after the Vietnam era. 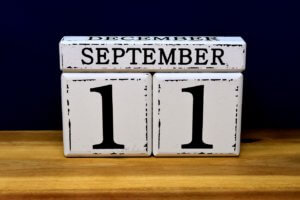 Despite the general sense of nothing being the same, things have changed surprisingly little since the Vietnam era and in some ways have gotten a good deal worse. Conflict remains a major factor of American life with soldiers still being deployed to Afghanistan to continue a war that started before some of them were even born. The fight against terrorism groups like ISIS, al Ouida and the Taliban goes on. There is no official draft into military service in the U.S., but there is still the Selective Service which every American-born male must register for when he turns eighteen.

While not strictly the same as the draft, the Selective Service creates a list of potential draftees. Anyone on this list can technically be called up for military service at any time. A situation not a million miles away from what it was like during the two world wars and Vietnam. The only major difference is the absence of effective or at least overt war propaganda. There are no government sponsored ads, at least that I have seen, encouraging fighting age men to go kick ISIS like there was with Hitler in the 1940’s and the Kaiser two decades before that. Enlistment propaganda is always preferred over conscription.

The Thorn In Everybody’s Side

Vietnam is also a major factor in the current situation few want to acknowledge. One of the fall outs from the Vietnam fiasco was a hard drop-off in enlistment numbers after the repeal of the draft. As author Robert O’Connor wrote in his novel, Buffalo Soldiers, “Vietnam was the thorn in everyone’s side.”

By the beginning of the Reagan era military enlistment had dropped to an all time low. Low enlistment shouldn’t have been a problem considering it was officially peace time, the last remnants of the Cold War the worst thing most people had to worry about. But, the military meant both money and power, particularly for a Republican administration. In lieu of the draft, several programs emerged to “encourage” enlistment. These tactics in fact, compelled people to sign up for military service.

You Call This Choice?

Among the worst of these was an initiative by which those convicted of minor non-violent criminal offenses were literally offered a choice between prison or military service. There are also some pretty questionable scholarship opportunities available only to those who join the military. It is also one of the few jobs, one can get without a high school diploma. A not unintentional play to attract people from economically depressed backgrounds, particularly African-Americans, Latinos and immigrants.

Don’t get me wrong, things have changed since Vietnam, but not as much as many assume. Remembrance of the past, need not be an empty exercise; alienating us from history, but instead a serious examination of what went before, to give valuable context to the present.